We started February with the WASCC Annual General Meeting. The Committee welcomes 2 new members, Bryan Krause and Simon Ridgewell, as well as our returning President, Russell Sewell and Committee members Chris Kneafsey and Tim Riley. We’re looking forward to the next 2 years and hope to continue the great work which has been happening over 2019. Our General Manager, Andrew Stachewicz provided a brief but informative overview of Club operations, including some interesting information and data on Club financials and race entry numbers. These are worth reiterating.

Financial: For a number of years up to 2016 the Club delivered an operating deficit, in 2016 this was significantly in the red, with an operating deficit of around $415,000 for the year. Fast forward to 2018 and 2019 where operating surpluses were delivered. In 2019 the surplus was a little over $149,000, a great result considering there was no track activity income for January and February because the new track surface was curing. This is a turnaround of over half a million dollars since 2016. Why is an operating surplus so important? Firstly because if the deficit trend had continued, it is unlikely the Club could have existed financially much beyond 2022. The second is that while the Club is a not-for-profit entity, operating surpluses are still necessary to cover depreciation and to provide funds for future capital development.

Race entries: In global, national and regional terms the motorsport environment has changed significantly over the past couple of decades, among some of the challenges are race entry and spectator numbers. This is not going to change. Analysis of race entries at Wanneroo Raceway between 2008 and 2019 provided some interesting and encouraging data. In 2009 we had around 1,300 race entries over the year. Over the next few years we saw a drop of over one-third to a low in 2012 and 2013 of around 870. However the good news is by 2019 entry numbers were back up again at just under 1,300. We’ll certainly be working to continue this trend. 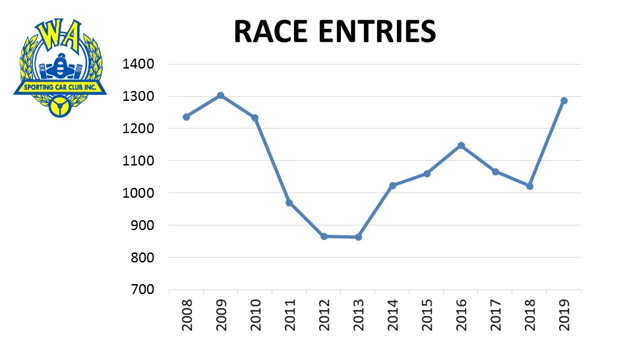 The Committee are sad to report that Rob Janney, our much respected Club member and great contributor to motorsport in WA, passed away on 11th January. A memorial service was conducted on 20th January which was standing room only, with many club members and motorsport colleagues in attendance. The Committee is currently considering a number of options by which Rob’s legacy to the WASCC may be remembered and perpetuated.

In terms of the Wanneroo facility, a busy month is planned for February. The end of the month will see the WASCC Birthday Race Meeting and season opener event. It’s shaping up to be a cracker of an event. For 2020 WASCC have also formed the Tarmac Sportz Series. It is specifically targeted at non-racing motorsport competition with events like Sprints, Time Challenge, Motorkhana, Driftkhana, Hillclimb and Point2point. It’s a great opportunity for new entrants to rev up into motorsport as well as experienced competitors easing back from door-to-door racing. Two Tarmac Sportz events are scheduled for February, more details are in this newsletter.

As well as our own events and activities, February is a busy month for other clubs and commercial hirers. Amongst some of the activities we’ve got Jaguar and Porsche car club track days, Infinite Time Attack, Drift School WA, D1WA, Driftwest Outlaw Series, Motorsport Australia Officials Training, V8 Drive Day, Track Action with bikes, superlaps, skids, cruise and drift, WA Police, FMG and ECU. What a month!

On a slightly negative note, during January WASCC received an unsolicited invoice from a party claiming intellectual property rights to the event name Time Challenge, demanding substantial payment for WASCC to use the name. The same party also separately contacted clubs and categories competing in Time Challenge events, demanding they stop using the name in any promotional material and communications. Advice to WASCC indicates the party has no exclusive claim to the Time Challenge name. The Club consider the claim frivolous and vexatious, will not be paying the invoice and will continue to use the Time Challenge event name. We recommend other facilities, clubs and categories also use the name.

Back to the positive front, and there’s plenty to be positive about! Our communications team along with the man with the velvet tonsils, Vaughn Brewer, have been busy in the off season conducting interviews with some big WA racing names. These will be brought to you over the next few months. Video links will be available, more details are in this newsletter.

If the start of the year is any indication of how frenetic things are going to be, it’s going to be a great year for WA motorsport as well as WASCC. We thank in advance our wonderful officials and volunteers, who always do such a great job. We also thank our hard-working WASCC management and staff. We also thank our much valued members, we’re aiming for some big goals in 2020 and look forward to being of service.

In the words of Buzz Lightyear: “To infinity and beyond!”